As a broadcaster, there is a wide variety of effects you can add to enhance your video stream. One of the more technically challenging effects is split-screen streaming. With the split-screen steaming effect, users combine two (or more) live video streams into a single presentation. Each discrete view maintains in its own section of the screen so that the viewer sees all the streams simultaneously.

So why take the time to learn how to do split-screen streaming? Some potential use cases for this feature include:

In this article, we’ll walk you through split-screen streaming solutions to help you make the most of this feature with your live broadcasts. Specifically, we’ll cover workarounds for dual broadcast channels and multiple computers. We’ll wrap things up with a review of the Discover Video Multimedia Encoder for use with split-screen streaming.

One potential workaround for split-screen streaming involves using 2+ broadcast channels, each with its own screen. Then, you can stream live video through each camera feed or source in a single channel. Next, simply place embedding codes on the page where you want to display the video. That way, the two videos appear side by side, as shown below:

However, there are several rather severe drawbacks to this approach. First, two broadcast channels effectively double the bandwidth not only for broadcasting but also for viewing. As a result, you may incur additional charges from your online video platform.

More problematic, this workaround results in a lack of options for the viewer. Viewers must click on the two videos separately; they can’t play them in full-screen mode, as that will show only one video at a time. This can give an unprofessional feel to your broadcast.

The one real advantage to a dual broadcast channel workaround– it’s fairly easy to achieve. In situations where it’s not important to give your broadcast a polished, professional appearance — for example, when you’re making the broadcast purely for information purposes — this may be the best way to approach it. 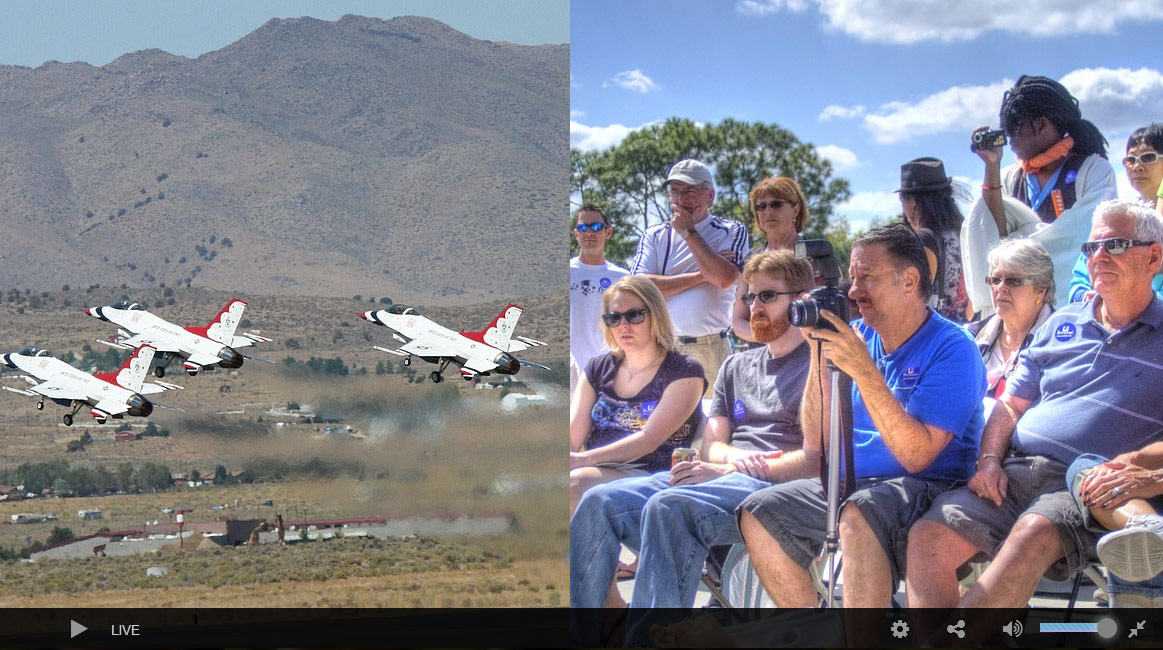 Another way to achieve a split-screen effect is via multiple computers (one for each camera view). Then, you combine the input from each computer into a single stream to broadcast. This method is fairly expensive, however. Like the dual broadcast channel workaround, this too presents new technical challenges, which we’ll cover shortly.

To set up this workaround, each camera or other video feed source (such as a video game program) must display on a distinct computer. Make sure all computers connect to the same network. Then, run the encoding software on another computer to create the final broadcast. Create a screen capture (in Wirecast, a “Desktop Presenter”) for each of the computers. Finally, put them all together in the final broadcast in your desired configuration.

The expense of this approach comes from the cost of multiple computers and multiple licenses for stream broadcast software. It can also incur high bandwidth costs, due to many computers operating on the same network. This can increase the total Internet speed you require to broadcast effectively.

One of the biggest technical hurdles when it comes to split-screen streaming is latency or time delay. Often, when feeding on one computer to another, a slight delay ensues so that your “live” stream is not quite live. This doesn’t pose much of a problem for a single-screen stream. When doing split-screen streaming, however, the two feeds can end up very slightly out of sync. To correct for this, you may need to adjust the timing on the faster of the two channels, by delaying it until no latency is perceptible. 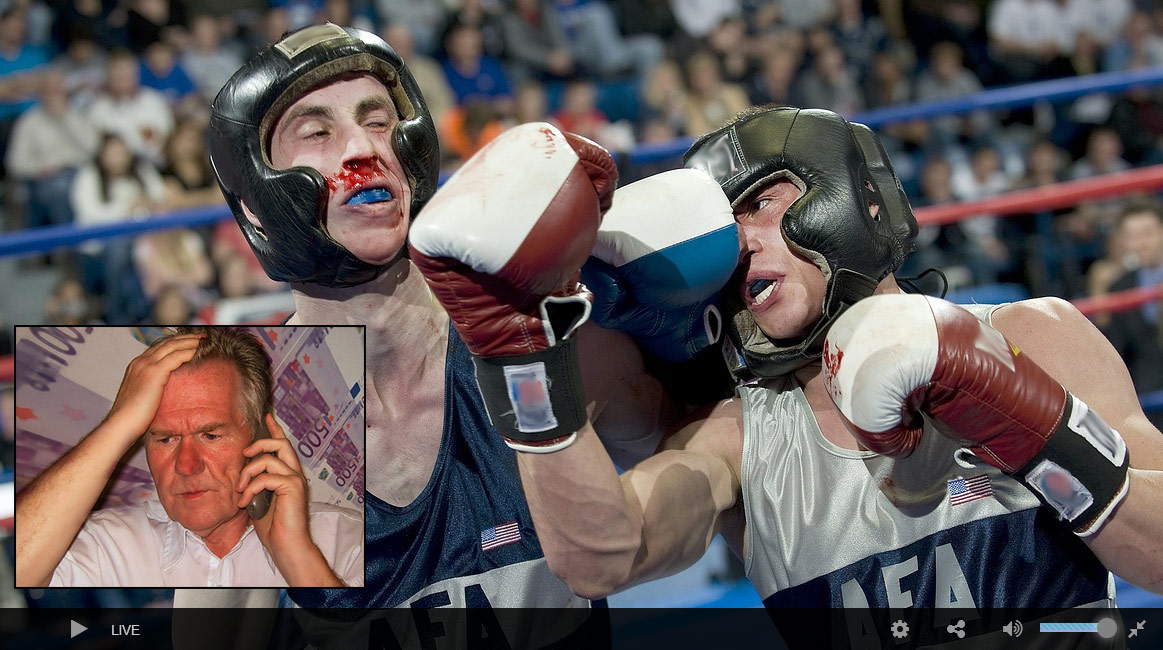 There is one encoding software program that does accommodate split-screen broadcasting. That’s the Pro version of Discover Video Multimedia Encoder. The photo to the left shows the use of this program for split-screen streaming.

You can see two video streams for broadcast on the left side of the picture. The split-screen result is on the right. You see the webcam stream in the upper quarter of the screen, and the rest filled by the graphic illustration screen capture. Each of these two elements has a defined video and audio source, and the program treats each individually. The screenshot also has an audio feed, while the camera stream has none.

This provides a single, elegant split-screen streaming video. From there, just broadcast the file at a single upload speed (in this case, 500 kbps, well within normal high-speed Internet capacity).

This is the most professional-quality way to create a split-screen live broadcast. The only serious downside to this professional approach? You’ll need to invest in a program that may be different from the one you’re currently using. You’ll also need to learn how to use it. Whether it’s a good idea to make that investment depends on what your needs are, and how often you intend to use a split-screen in your broadcasting.

After you’ve dipped your toes in the live streaming water, you may want to explore some of the more technically difficult ways to enhance your production. Split-screen streaming is one candidate for doing this. However, as explained above, it’s neither simple nor, in many cases, inexpensive.

How important is live video streaming in the context of your business or other activities? Is it a central practice, so that video is either all you are doing or a crucial keynote to what you do? If so, then there should be virtually no limit to how deep you go into the technical waters. Any effort or expense is a justified investment of time or money or both.

As streaming technology, both hardware and software, continues to progress, split-screen streaming and other technical enhancements are likely to become standard and commonplace. In the meantime, you can usually get the effect you’re looking for with a little effort and ingenuity. Whether you want to stream live video on your website, host regular live-streamed events for your business, or anything in between, Dacast has got you covered!

Ready to give the Dacast streaming platform a try? Why not sign up for our 30-day free trial (no credit card required) to test out our service for yourself! We’d love to help you start streaming live today.

Finally, for regular tips and exclusive offers, you can also join our LinkedIn group. Thanks for reading, and feel free to share your comments, questions, and feedback below. We love to hear from our readers, and we’ll do our best to respond to you quickly.